The A - Z April Challenge: K

K is for Kori Bustard
.
Finding an animal to post for today was a challenge. I use only pictures I've taken myself, and could think of no species we'd seen in Africa that began with a K. Then on my lists of animals sighted, I came across a bird we'd spotted briefly in Kenya...
. 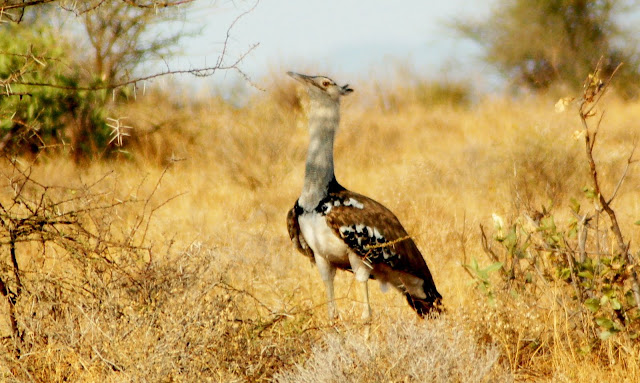 .
With an average weight of 30 lbs. and a wingspan of eight feet, the Kori Bustard is one of the heaviest birds capable of flight, though it spends most of its time on the ground in search of seeds and lizards to eat. Slow moving and passive, it takes flight only to escape its many predators.
.
This bird population is diminishing at an alarming rate. Bustards take several years to mature and have a low success rate with breeding. Human encroachment and hunting threaten it further, and unless stringent measures are taken, the Bustard's future is gravely threatened...
.
.
For more A - Z posts, be sure to pop by Arlee Bird's site and see what others have done with the letter K...

Have never heard of or seen this bird before, so thanks for the info!

Oh how interesting. Sad that even ones we havent heard of before are threatened. Argh. (He does look like he'd cook up like a big turkey though. I cant believe I just said that!)

It would be sad to see the demise of this huge bird. It seems as though it's already evolving to a flightless state, if only it had time. Wonderfully informative post - thank you:-)

What an odd looking birdie, with a neck almost as thick as an ostrich's. I wonder if they're distantly related...