The A - Z April Challenge: L 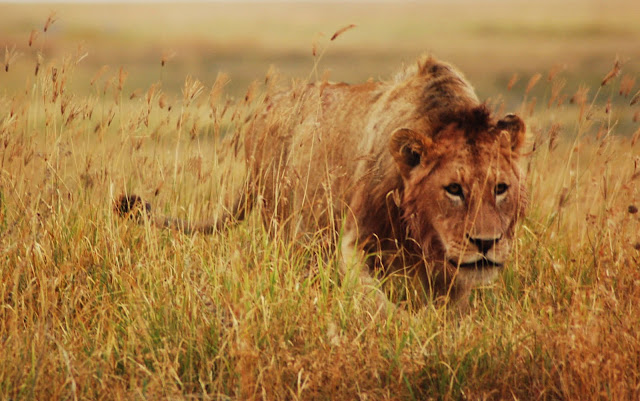 We spent time on the Serengeti watching a pair of lions cross the savannah to settle in with the rest of their pride. My attention was captured by a lioness whose scars told the tale of her hard-won life.
.
These pictures speak for themselves...
. 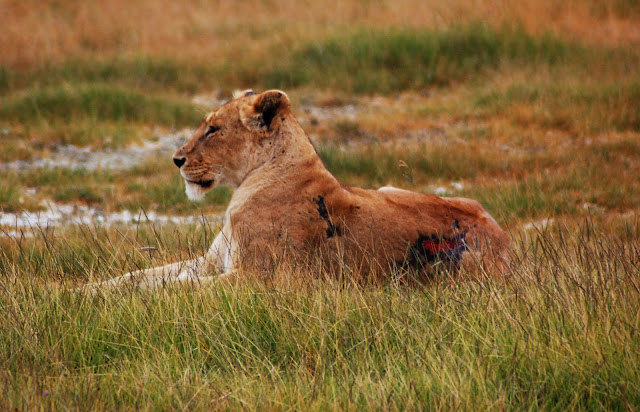 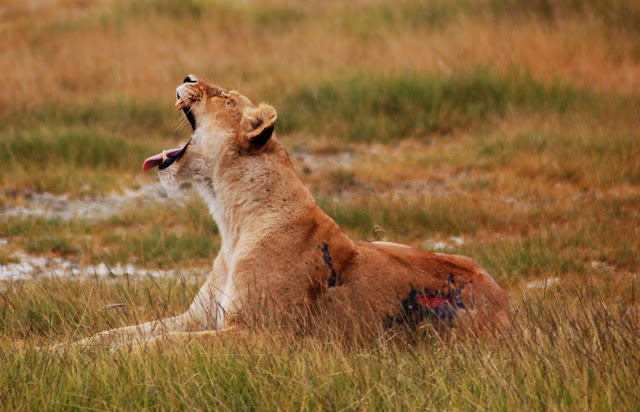 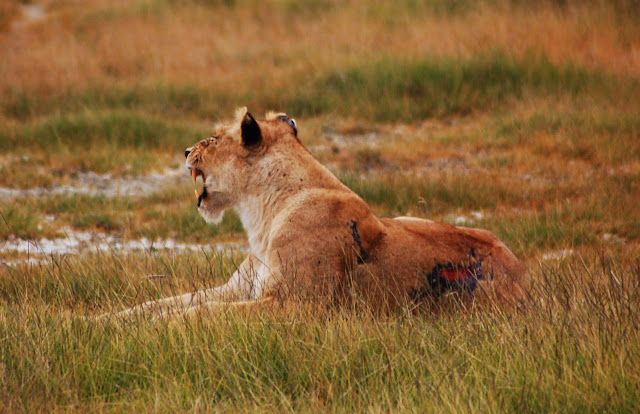 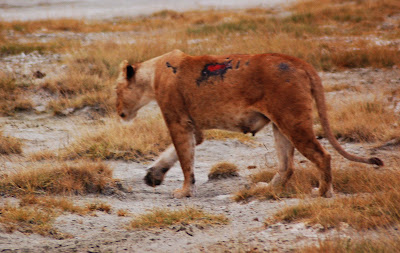 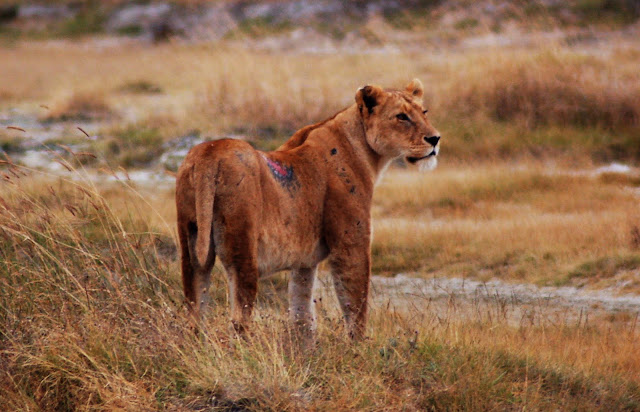 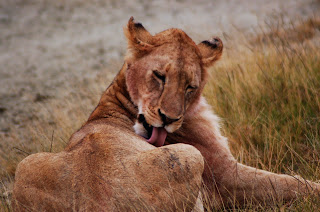 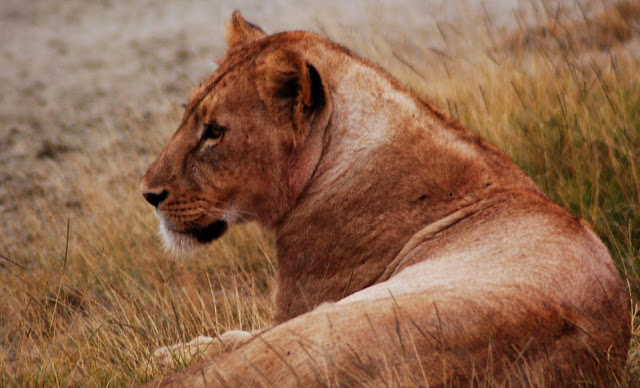 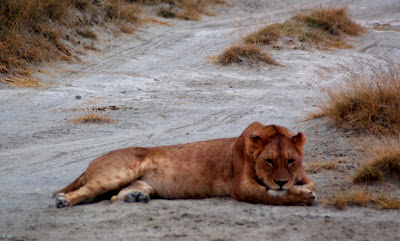 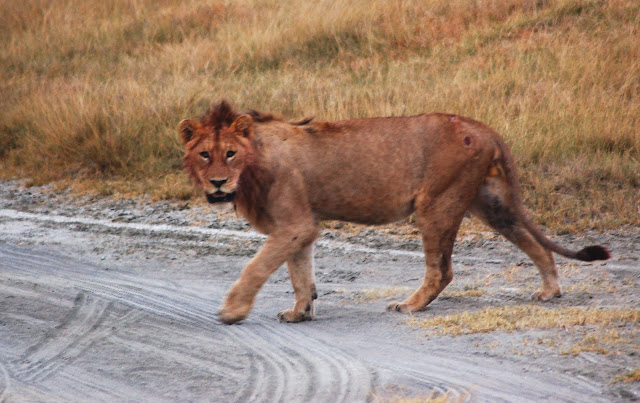 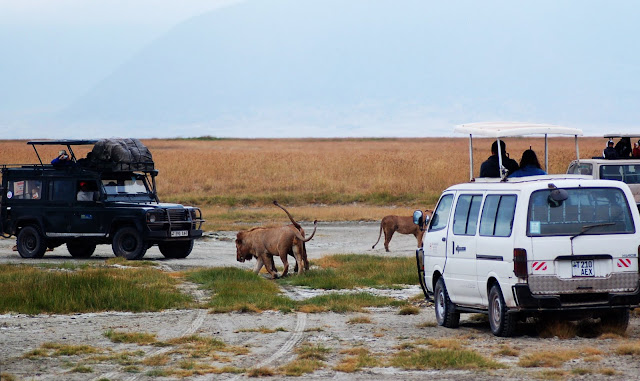 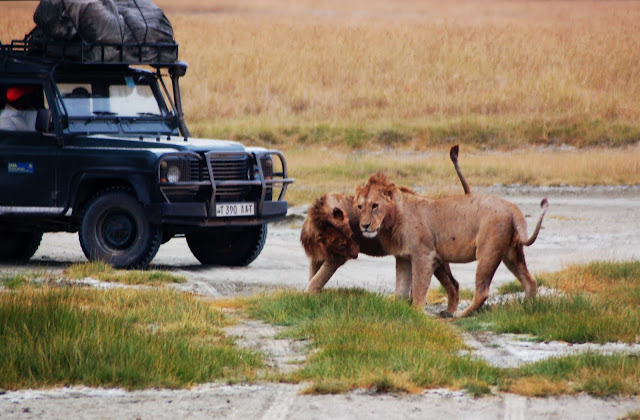 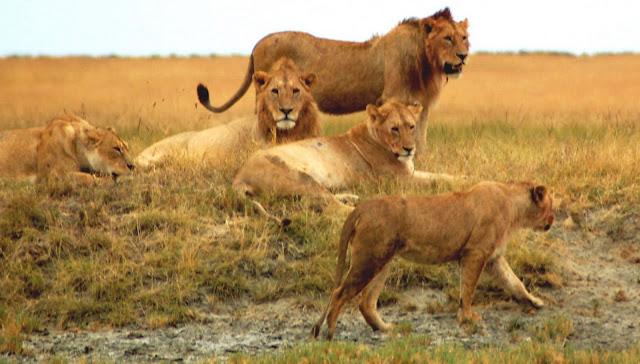 For more A - Z posts, be sure to pop by Arlee Bird's site and see what others have done with the letter L...
.
http://www.tossingitout.blogspot.com/2011/01/very-special-and-exciting
Posted by Lynette Killam at 12:05 AM

What a wonderful privilage to be so close to the Kings and Queens of the Savannah!

Life in the wild can be harsh and cruel - it's good to be reminded of that. The lion in your first photo is magnificent.

That lioness is quite a survivor.

The first photo of the lion in the grasses is, indeed, magnificent, Lynette. I imagine it would be quite eerie to be in such close proximity to creatures that, in our part of the globe, are only seen behind cages and bars. The wounded lion might have struggled for its meal but its yawn seems to say it was worth it!

Wow, something took a big chomp out of her alright. Looks fairly recent too.

Wow, that's wild, seeing how close the vehicles are to the lions! You really walked (er, drove) on the wild side!

What animal would have attacked that lioness?

Again, Lynette, you captured so many fabulous wild animal shots! How long was your holiday in Africa?

Oh, poor beautiful wounded lions. Such wounds! Fantastic photos, Lynette. Can only imagine what it is to sit within mere feet of these beautiful wild creatures.

Even with the scars she's so beautiful!
Fascinating post, Lynette.

Incredible photo's that tell more than words ever could, just amazing.

You must have been filled with awe while taking these photos!

It's amazing all the scars these guys have when you see them up close.

Funny story - when I was in SA I went on a proper safari twice (plus a number of self drives). The first one of these was with my mum and dad. In our jeep on the first couple of days it was just the three of us, and a French couple and their son. On the afternoon of the second day along came quite the pair...

We came to the conclusion that the conversation preceding this trip must have gone something like this, 'Son, great news, you're going to South Africa on vacation. The bad news is, you're going with granny.' Seriously, granny was nutsy cuckoo! The young lad was about 12 or 13, and looked so often like he wished the ground would open up and swallow him at her latest faux pas, that I think he actually shrank over the time we knew them! Whilst one hesitates to say they were American tourists, she reeeeaaaally embodied the worst of all American tourists!

We were out on our morning drive, their second time out, and our last morning there, and the driver got a call in near the end to say that there was a pair of mother lionnesses and their cubs that had been spotted. We queued up at a distance to get in there, all the while listening to granny's incessant 'What's that?!' screeched at top volume, as, holding the compact camera over her head, she shot blindly in the vague direction of what she thought was an animal (9 times out of 10 it was an impala). When we finally got to our turn (the reserve rules were such that only one vehicle at a time could get close to the animals) we got stuck in the sand right next to the mamas and their cubs.

The ranger surveyed his options, and told us all to sit still. Granny promptly stands up and says she's getting out, we all should... Much screaming from the ranger later (at as low a volume as possible to prevent the lionnesses only 10 yards away from pouncing) she was persuaded to regain her seat. It took about 25 rather nerve-wracking minutes to get us out (involving, among other things, the tracker very gingerly climbing back over to our side of the jeep, and, in the end, a long tow rope and another jeep to hoik us out of there) all the while with granny insisting that she hadn't got this far in life just sitting around waiting for things to happen, and look, the cats didn't look that vicious, honestly, what was all the fuss about! We were just glad daddy and his brothers were elsewhere at the time...