Book Review: Dawn of The Dreadfuls 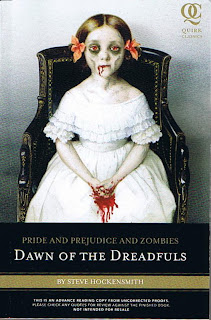 Having come of age in the rebellious Sixties, I am predisposed to enjoy a book wherein women speak their mind, defy stereotypes and kick serious butt! Strong female characters are what drew me to Jane Austen, those independent souls who knew their own worth and refused to be stifled by the conventions of the day. It is that immutable sense of self that keeps me coming back to revisit their lives from time to time.
.
I must admit, however, to some trepidation when approaching Quirk Classics' Pride and Prejudice and Zombies last year. While it was clearly not going to be my traditional rereading of a favourite classic, I was surprised to find I enjoyed it. Elizabeth Bennet was the same vital woman I admired in the original Pride and Prejudice, only this time she was able to wield a katana sword as easily as she did a sewing needle.
.
I was, therefore, delighted to receive an Advance Reading Copy of Quirks Pride and Prejudice and Zombies, Dawn of The Dreadfuls, a prequel to the above, written with tongue firmly in cheek by award-winning author and reporter, Steve Hockensmith. Set four years before P&P&Z, it takes us back to the root of the zombie plague. Elizabeth is a teenager leading a typical life in Regency England. All that changes when her father converts the greenhouse into a dojo and begins to train Elizabeth and her sisters to be warriors. Martial arts, nunchucks and muskets replace chatting, tatting and teatime.
.
At first awkward and unenthusiastic, the Bennet daughters soon embrace their newfound skills and use them in defense of the countryside, under attack by voracious hordes of zombies. Along the way, Elizabeth attracts no less than two suitors, though her youth and inexperience have equipped her with little ability to respond in kind. From naïve child to empowered slayer of the Undead, Elizabeth’s transformation is swift and entertaining to follow.
.
Unlike P&P&Z, there are no passages of Ms. Austen’s writing inserted into the text. This is all Steve Hockensmith and his wild imagination. Dawn of The Dreadfuls offers generous amounts of both action and romance, delivered with comedic accuracy and a good dose of irreverence. In the end, this is not a novel to take too seriously. Die-hard Austen fans may cringe at the notion, but for sheer escapist enjoyment, this book provides much humour and great entertainment, delivered with panache.
.
Poking fun at life occasionally helps us gain perspective and insight…and are those not the very qualities that endeared Jane Austen to us from the beginning? What she would have made of the Quirk series will never be known, but she would no doubt wish us to continue watching life unfold around us and to explore its intricacies with honesty and awareness as she did. Any book that challenges our judgment and makes us think anew is a good one as far as I’m concerned…so I end by thanking Mr. Hockensmith, for adding yet another layer to my appreciation of the ultimately inimitable
Jane Austen.
.
.
I am including a link to the Dawn of The Dreadfuls book page on Quirkclassics.com for those wanting more information.
http://quirkclassics.com/index.phg?q=dawnofthedreadfuls
.
There are also 50 Quirk Classics Prize Packs to be won!
http://www.quirkclassics.com/index.phg?q=QuirkClassicsContestDODReviews
.
Enjoy... and for an added treat, google Steve Hockensmith or check out his blog...
.
Posted by Lynette Killam at 10:27 AM No comments: