Mike and I just got back from a quick road trip that let us spend a couple of days in Nevada, and a few more in California. The main goal was to see Death Valley -which is indescribably beautiful and simply stunning- but as a lover of topography, almost every turn in the road provided me with some new feature to look at as we wound our way through the wide open spaces of the high desert. 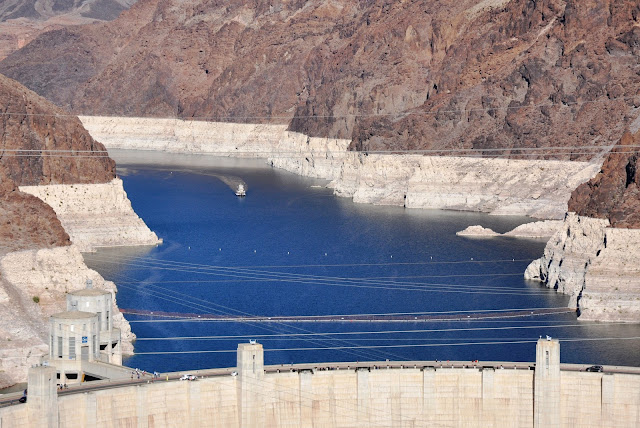 Of course, I took many pictures and am posting a few of them now. I shot this photo of Lake Mead and Hoover Dam from the walkway on the new bridge. We later learned that the water level was down 150 ft. after a scorching summer, as evidenced by the waterline. 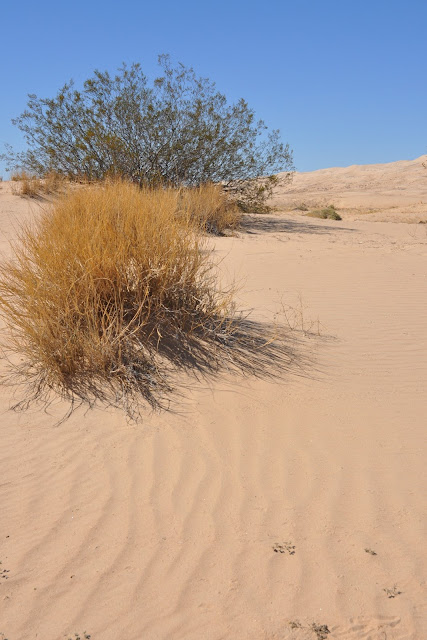 The Kelso Dunes in California were lovely, nestled among rugged hills in the Mojave National Preserve. We had the dunes to ourselves, to enjoy with a hot sun, the slightest ruffle of a breeze and the soothing sound of silence


A few brave lizards were to be seen scooting about, but most wildlife knew to stay cool in the many burrows we saw dug into the sand.

California's Red Rock Canyon was breathtaking, the scale and colour of them a delight to investigate. 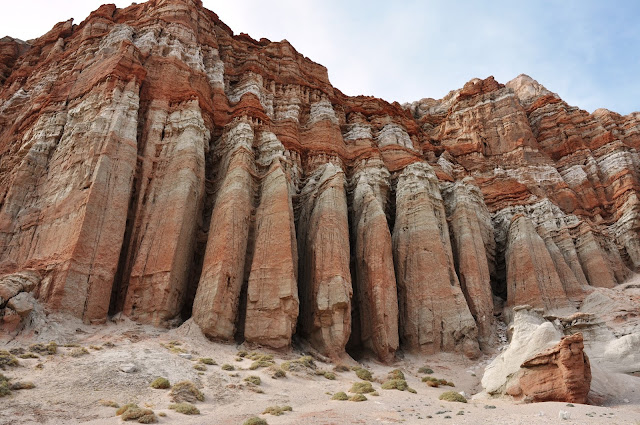 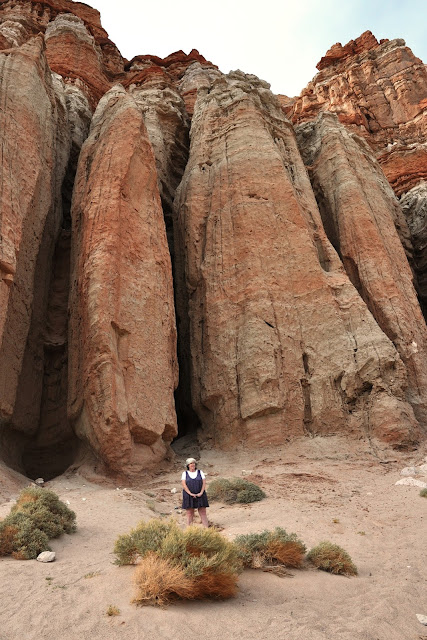 Oddly enough, I feel more relaxed in the desert than I do here at home.

There is endless space to breath in these wide open spaces, not always an easy thing to find in our busy lives. 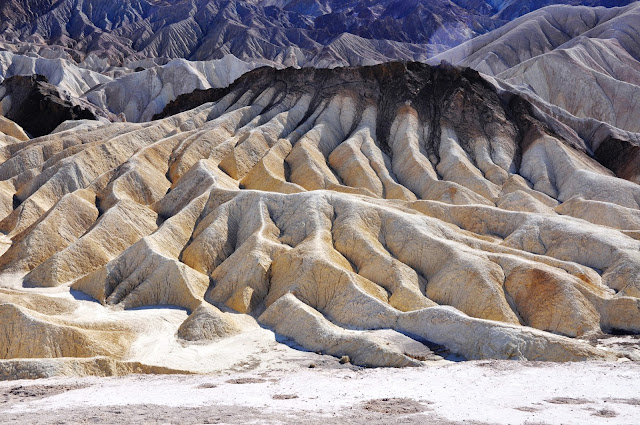 Again, I can't find the words to describe Death Valley. It is huge, untamed, colourful and endlessly fascinating. Mike and I tend to cover as much ground in a day as we can when away, and we didn't leave enough time to enjoy every stop in the park.  Guess that means we'll have to do it again....

The picture above is Zabriskie Point. I'm going to look up the movie of the same name from years ago and see if the scenery plays a significant part in it. 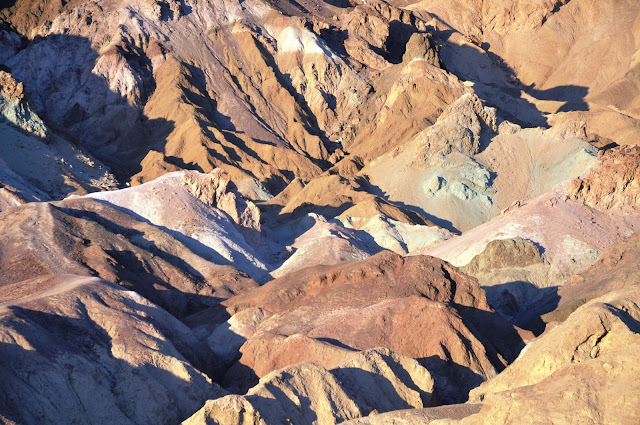 Artist's Palette is one stop no-one seems to neglect. We spent a lovely hour watching the sun go down and the shadows weaving their evening magic. 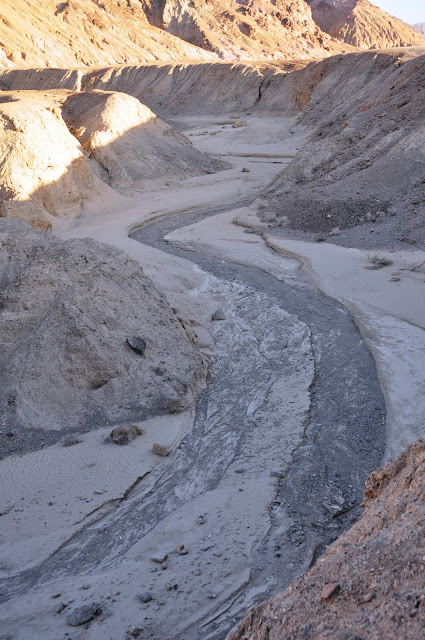 A huge arroyo had carved it's way into  the hills where we stood, and we could imagine how thunderous the water would sound roaring through it in a rain storm. 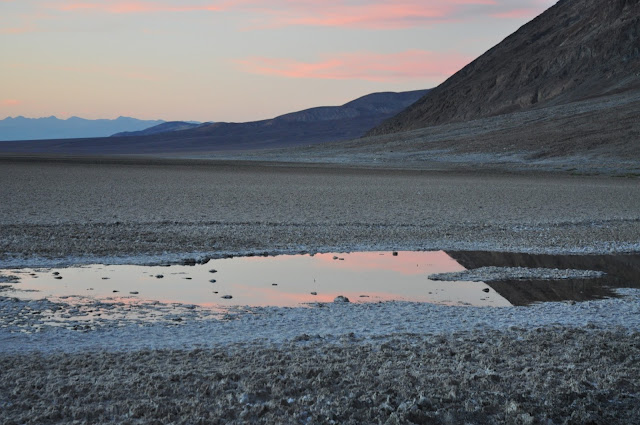 As daylight neared it's end, we found ourselves in Badwater Basin, a salt flat that covers 200 square miles. It is also the lowest point in the USA at 282 feet below sea level.

I have neglected my blog shamefully, but will return with more trip pics soon. Thanks for stopping by...

April Tulip Festival in BC

As my husband and I made our way home after a trip to Chilliwack last week, we spotted a dazzling field of tulips field off to our right. Mike turned in automatically, knowing this was our kind of stop and was surprised when I objected in a most uncharacteristic way. 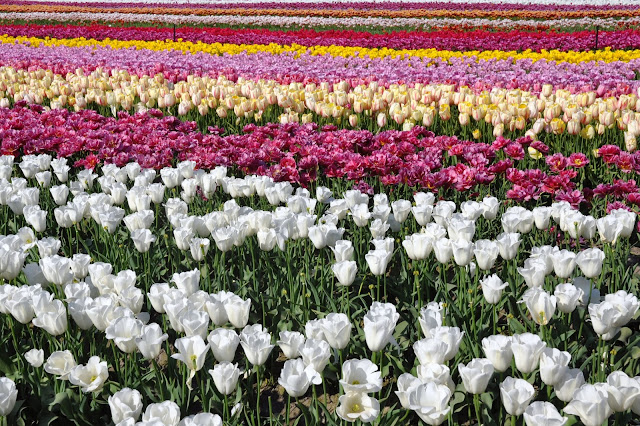 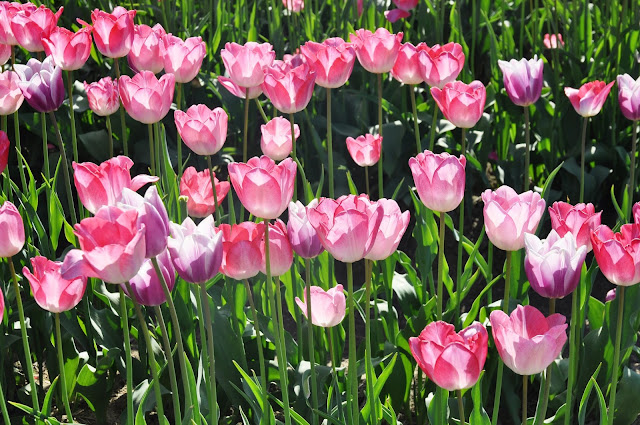 It was actually more of a whine than a polite demurral. The long day had been scalding hot, I was thirsty  beyond measure and was dismayed to see literally hundreds of people on the property to navigate through, many of them also drooping in the blistering temperatures with no shade in sight. 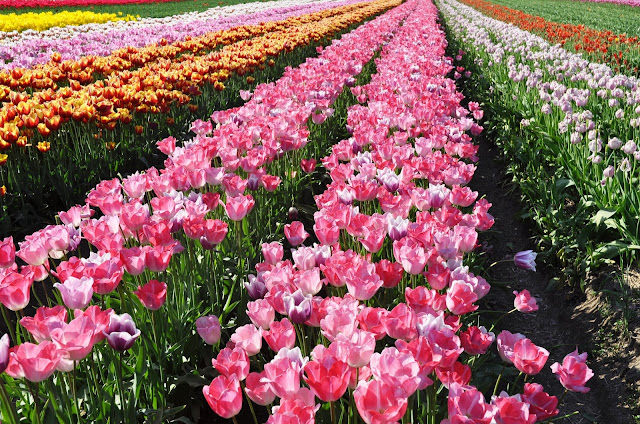 Throw in ten acres to explore, and what would thrill me on a cool day, seemed daunting to the extreme. 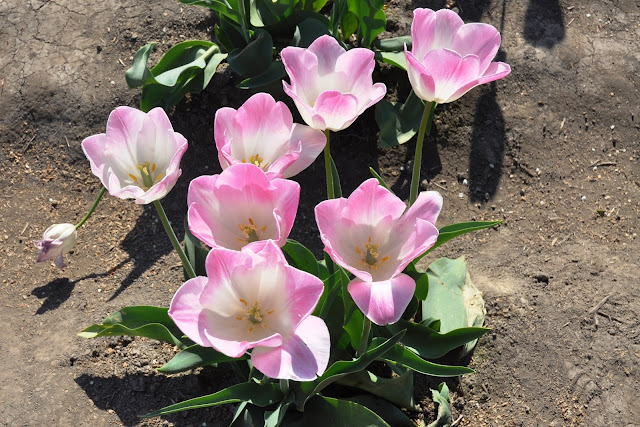 Of course,  my spirit of artistic adventure knew better and kicked into overdrive. I should have known I could never resist this photo op..impossible to pass the chance by. 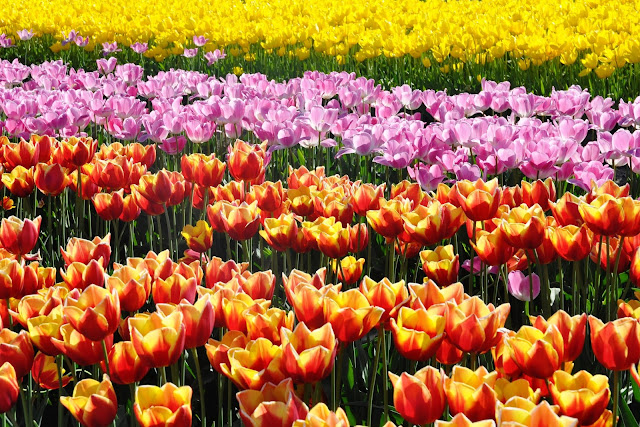 Unfortunately, I got no brilliant shots like the panoramic vistas of tulips I've seen so often in magazines. My efforts were lack-luster at best, and it was difficult to get a wide shot as every row seemed to be peppered with people and their selfie sticks! Being one who dislikes having her picture taken, this is a trend I will never understand... 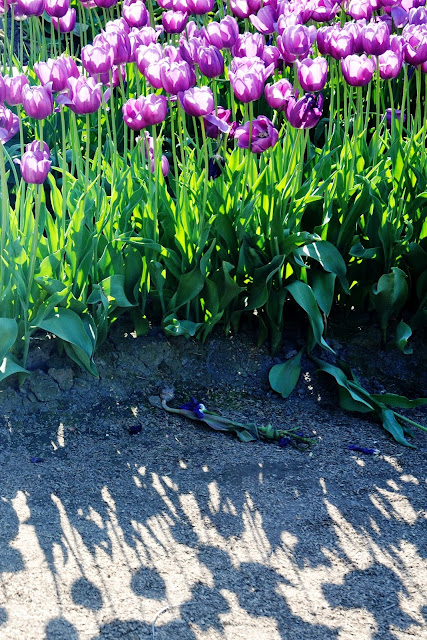 In the end, I lasted for an hour, and got a few good shots, after which we scurried off to the nearest Dairy Queen for beautifully chilled milkshakes. Though seriously dehydrated and a little sunburned, I was glad my instincts had not allowed me to wimp out. 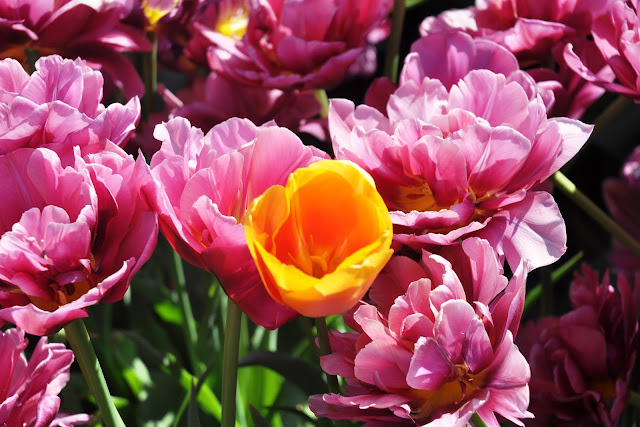 I will look for this event next year, but will bring my own water and snacks in case the organizers still don`t realize they could as much money having a snack booth as selling flowers! 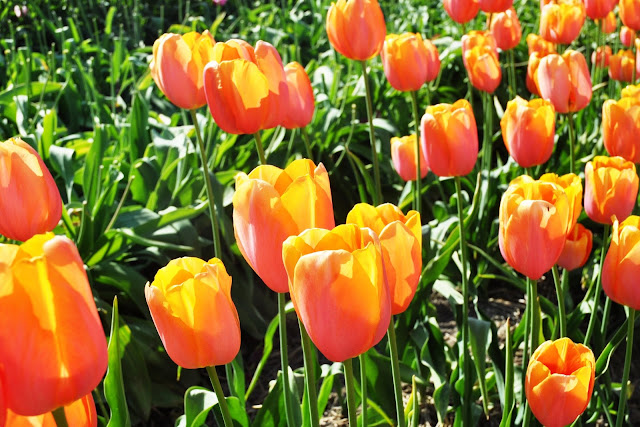 The Stoning of Soraya M.

A serious word of caution:

This is not  a "nice" post…I offer no pretty pictures or poetry for International Women's Day. What you will find is graphic depiction of violence in words and images to tell a story that is ugly beyond belief, but is a story that needs to be told until such things never happen again. If you choose to skip my page today, please know that I very much appreciate you stopping by. 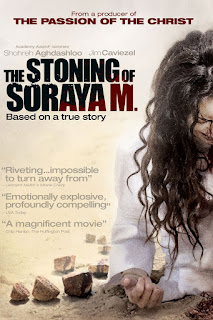 Most of us are neither naïve nor ignorant of world affairs. We know that life is harsh and that we humans are frequently less than our best selves, yet we doggedly seek out goodness in life and cling to optimism even in the face of adversity. This can be easy to do for those of us sustained by the bounty of lush lands and bolstered by the love of family and friends. Other realities are far more horrific. 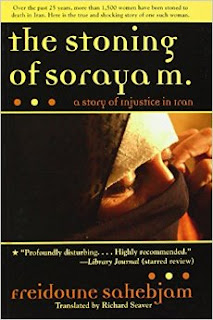 My comfortable life was dealt a visceral blow recently in the guise of an ordinary TV movie, stumbled upon while I ate my gooey dessert and idly flicked through channels. I caught only the end of this film, but in that half hour, the savagery of the story stunned me and quickly turned dessert into bile.

Based on true-life,” The Stoning of Soraya M” is the account of a tragedy that took place in 1986 as Khomeini was coming into power in Iran. Within a marriage arranged in her early teens, Soraya and the nine children she bore suffered repeated abuse under the heavy hands of husband and father, Ali. When Ali requested a divorce in order to wed a 14 yr old girl, Soraya protested, knowing her family would starve to death without the support of her husband.

The devious and tyrannical Ali was undeterred…as adultery is a crime punishable by death under law he simply bribed a local man to testify to Soraya’s infidelity. In a cruel twist, her paid accuser was the husband of a recently deceased friend, for whom she’d helped daily to cook and look after his children, a fact that was conveniently twisted to help condemn her. With no means of defence, and no offer of aide, Soraya’s fate was sealed. To her husband’s demand that she be stoned to death to cleanse the village of her, the village officials with whom he was colluding responded enthusiastically.

It is said that 1,000 women have been stoned to death in the last two decades. I have read accounts of these brutal punishments, described briefly in a paragraph or two posted in the local paper…I wonder now how I remained emotionally removed from them for so long. A few minutes into this film, I began to shake, and was unable to control that shaking all evening, so great was my distress. I am beyond horrified, and can find no words to convey the hole this story tore in my heart.

How have we gotten to a place in life where burying a bound and defenceless women up to her chest in sand, then systematically pelting her with rocks and bricks till she dies is an acceptable thing to do, indeed an honorable thing to do in the name of God’s will? No God I know -or want to know- would advocate the inhumanity this story depicts.

I watched the film in horror, as Soraya’s own father stepped to the front, exercising his right to take the traditional first shot. A respected village elder, he would thus claim revenge for the shame his adulterous daughter had brought down on his head. The first heavy stone he aimed at Soraya’s face missed its mark, but at his feet were left three of the four stones each man in the village was allowed. Angry with the miss, the father picked up a larger piece and threw again with more force. When that also went wide, he impatiently grabbed a third, not stopping until he’d cut through the skin of this daughter to whom he’d given life.

As is the custom, Soraya’s husband was next to hoist a stone, hurling it unprompted with eager excitement. When it did not hit her, his smile slipped and he quickly shot again, this rock barely glancing off a shoulder. Now becoming enraged, he hurled a jagged rock with such force that it bounced wildly off his wife’s head, and snapped her backwards. Forehead split open and bleeding profusely, Soraya still managed to right herself and raise her head once more.

When I thought the story could not get more abhorrent, I watched the husband pull his two oldest sons out of the crowd. Roughly, he placed rocks in their hands and pushed them to the front so they might fulfil their duty of glorifying God and the Iman by ridding their village of the wicked infidel who had borne them. They did as they were bid with swift and simultaneous throws. I have never been impacted by a movie to the extent I was upon watching these young men stone their innocent mother and be lauded for it by the frenzied mob of villagers. Rocks began showering Soraya, occasionally making contact, but when she still refused to die, the enraged men circled the bleeding woman and threw rocks with such force that her head split wide open.

If you have the heart, and the stomach, to watch this film you will share my horror. I need not watch it again; it’s burned into my head for all time. The 1994 novel, on which this film is based, was written by journalist Freidoune Sahebjam. Its English title is, “The Stoning of Soraya M: A Story of Injustice in Iran”, translated from the original French edition of four years earlier, “La Femme Lapidée”. It is an horrific, compelling and infinitely disturbing read.

Whether or not you choose to pursue the story please let me know what you think. Show me there are many who abhor the gender apartheid that marginalizes women, the religious fanaticism that condones violence and the mob mentality that dares masquerade as law; please remind me there are countless numbers of people for whom such barbarity will never be mistaken for justice.....
Posted by Lynette Killam at 7:42 PM 4 comments: