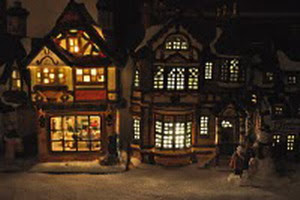 With Christmas Day almost upon us, I thought to reprise an article I wrote for a White Rock magazine some years ago.

I am chagrined to note that not much in my approach to the holiday season seems to have changed! 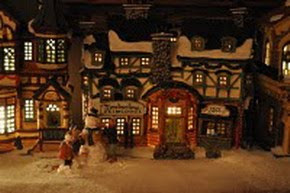 On my list of thing to do, Christmas shopping rates below scrubbing toilets and above gutting fish. It's not that I dislike giving gifts...nor am I immune to the spirit of the season. Christmas morning never fails to find me dewy-eyed with emotion. Dewey-eyed is usually the best I can manage; by then I've shed enough tears to completely wash away the pier at White Rock!

The odd thing is that I manage to forget this from year to year. Seduced by light-bedecked trees and a chorus of carols in the background, I plunge willingly and wistfully into the shopping mall. With a long, generous list in hand and a heart full of good intentions, I convince myself that this will be the perfect Christmas; this will be the year I make everyone's dreams come true.

The good intentions do not last long, and the list grows no shorter in spite of the rate at which my wallet empties. Nothing has prepared me for the prices. I make a valiant effort to resist, but all too soon I'm choking out those ruinous words, "Charge, please!". There is no turning back now.

My undoing is that I may be the only 40-year-old woman who still believes in Santa Claus. To me, he's more than a fat old man who hates to shave and has strange taste in clothes. He makes wishes come true, and in pursuit of that quest, I am his tireless ally.

Even I have my limits, however. Nothing can persuade me to buy a talking toy bear that costs as much as a week's groceries. As I see it, what could he possibly have to say that would be worth giving up Twinkies? More importantly, do I really need another mouth in the house?

For me, the real horror comes when shopping for that most dreaded of the species - the person who has everything. Hours of numbing indecision leave me willing to consider any idea, no matter how bizarre. Perhaps Uncle Bob really does need an engraved brass case to hold his sticks of gum. Maybe cousin Ralph could use a pair of slippers that look like chopped-off bear feet. Desperation tends to cloud good judgment.

Shopping trip follows shopping trip, and as the days count down, I feel the pace speed up alarmingly. Television commercials become longer than the shows; sales are more common than short tempers, and the paper boy is forced to hire an assistant as advertising inserts begin to outweigh the news..

This is when real panic sets in. Stores that have run out of stock keep you dangling with the promise of future orders. Competition becomes fierce for what little is left on the shelves. Even the calmest of shoppers can resort to bared teeth and a warning growl when it comes to a choice between remaining ladylike or getting her little boy what he wants for Christmas. While I have never actually seen blood drawn, I am careful not to go Christmas shopping with people I care about.

Caught up in the momentum, the most important thing I forget from year to year is that when that special morning finally arrives, the amount of effort it took to get there no longer matters. As I exchange gifts with my loved one, what we share goes far beyond the gift itself. We give of ourselves, and out of that giving, a little magic is woven.

Santa and I have pulled it off another year; and even my husband's moaning when the bills begin to pour in does little to dampen my euphoria.

After all, you can't put a price tag on magic!
. 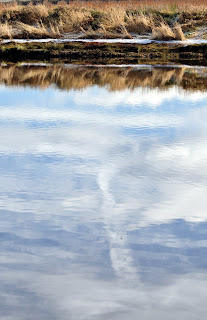 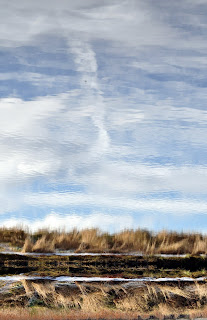 As is normal in the Fall, Vancouver has turned gray, damp and cold. Sunday afternoon found us taking a chilly walk through Surrey's Serpentine Fen.
.
Because I was unimpressed with the photos I got, I thought to flip a few and see what happened.

Above at left is the original shot, taken across the river. When I turn it upside down, the sky seems to shimmer with light. 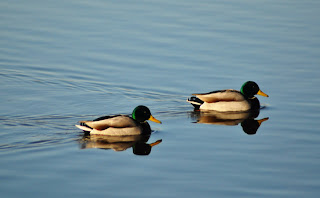 .
Mallard Ducks were
lazily swimming up the Serpentine River. 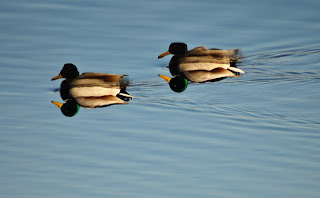 Turning the picture upside down gives me a mirror image of the ducks. 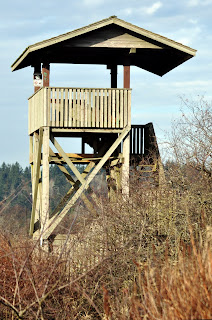 .
The Fen is a waterfowl sanctuary, so there are many birds to be seen. Several viewing towers around the property allow one an overview of the area. 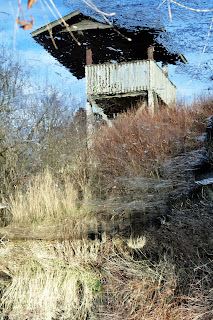 The watchtower takes on a whole new look when reflected in the water. 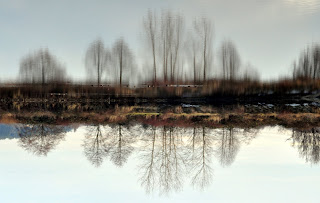 .
This top photo is the flip side of the one below it. I like the ghostly look of the trees, as if a heavy fog was rolling in. 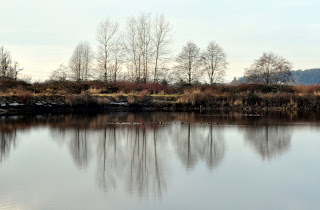 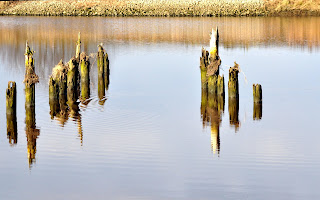 The sun showed itself briefly, and lent colour to the day. I quickly snapped a few photos of stunted posts in the river. 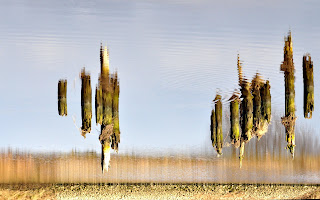 The surreal effect created when flipping this shot over creates confusion...one cannot be sure what one is actually looking at...

In our wired world, where
wily words wield weapons,
weird
is the new normal...
.
.

.
I am linking this post to Poets United Thursday Think Tank, where the prompt for today is 'weird'. For more weird poetry, do check out the following link...
.
http://poetryblogroll.blogspot.com/2010/12/thursday-think-tank-25-wierd.html
.
The photos are a few of my abstract Artist Trading Cards...
.
Posted by Lynette Killam at 11:06 AM 16 comments:

As today is World AIDS Day, I thought to repost a piece I put on my travel blog some time ago. It is a day to look outside the safe and cozy lives so many of us are fortunate to live.... 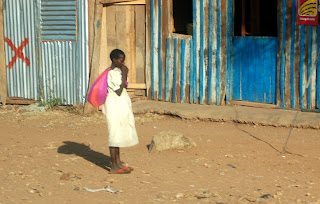