The A - Z April Challenge: R

Today’s entry in the A – Z Challenge is a study in African contrast…from a small, swift bird to a large and lumbering mammal.
.
R is for Roller Bird
. 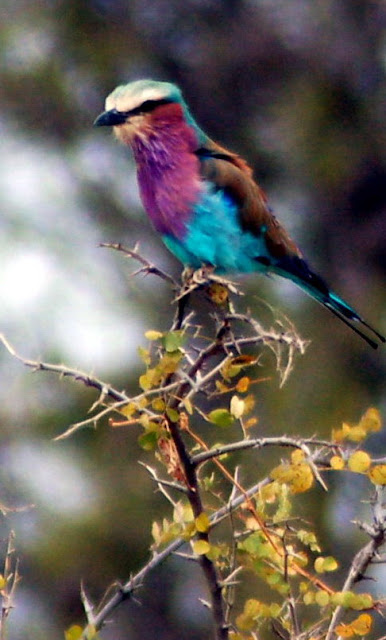 .
.
.
The beautiful Lilac Breasted Roller Bird is Kenya's National Bird.
.
It is named for the impressive aerial acrobatics it performs as part of courtship, twisting
and diving
dramatically
to the accompaniment of
its own racous call.
.
.
.
.
.
.
.
.
.
.
. 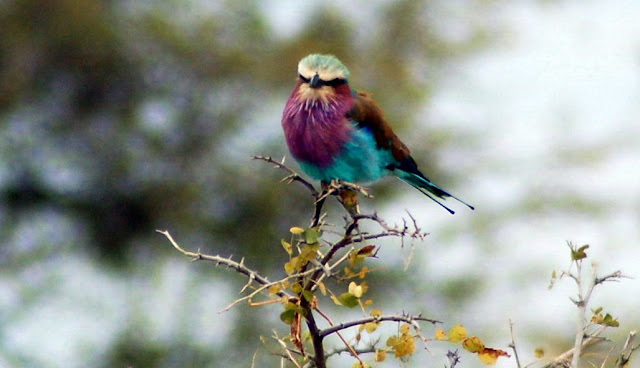 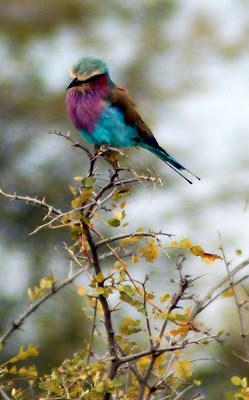 These are not easy birds to photograph. They spend their days on the top of tall acacia trees, the better to spot their prey of insects, lizards, rodents and small amphibians, swooping down fiercely to make their capture on the ground.
.
.
.
The Roller bird's pretty looks contradict its fierce behaviour. This is a territorial bird who can best be described as a warrior. It is not surprising that this species is flourishing in East Africa.
.
.
.
R is also for Rhinocerous
. 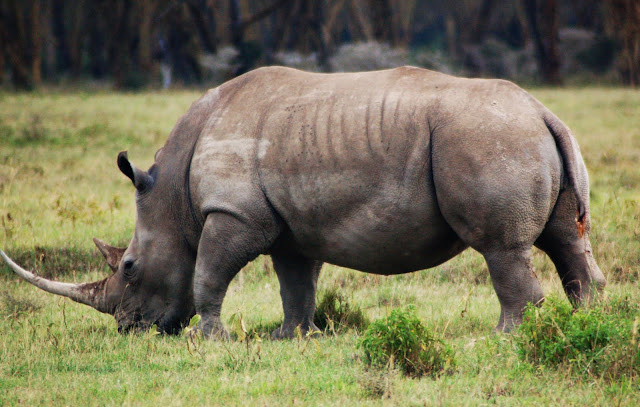 The African Black Rhinoceros is a large, primitive looking mammal that dates from the Miocene era millions of years ago. Slow moving and often solitary, these are herbivores who roam the grasslands eating plants from the ground or nibbling at low branches in trees.
. 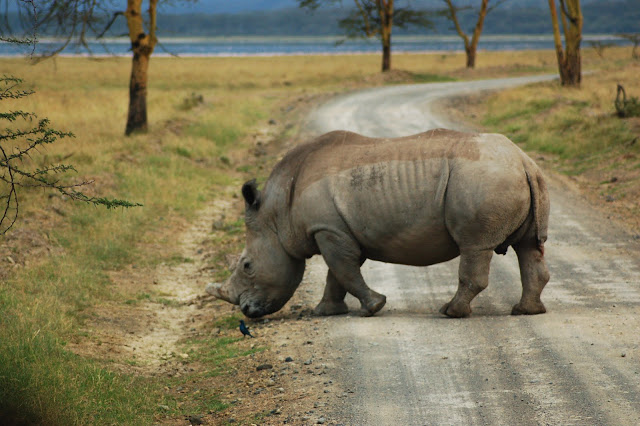 Rhinos rank among the most endangered species on Earth. Valued for their horns, they face a serious threat of extinction. Some cultures believe that powdered rhino horn will cure everything from fever to food poisoning and will enhance sexual stamina.
. 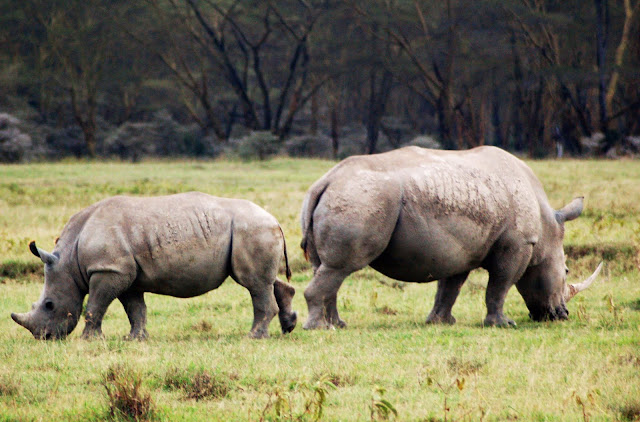 .
During the latter half of the 20th century the numbers of African Black Rhinos were severely reduced from an estimated 70,000 to a mere 2,000. Since 1970, the world rhino population has declined by 90%, and of the five species remaining in the world today, all are endangered.
.
Man is the cause of the demise of the rhino. In the wild, it has no natural predators and, despite its size and antagonistic reputation, is an extremely easy animal for man to kill. With organized gangs of poachers who sell rhino horn to black market syndicates the threat to their species remains great . 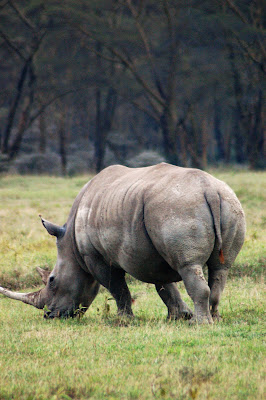 .
The Masai Mara holds one of the last unfenced rhino populations in Africa. The Mara population declined from 150 animals to less than 15 in under two decades.
.
When we visited in 2006, our guide told us there were only two rhinos left in the vast reserve...a mother and her calf, born after a male wandered into the park from another area.
.
While a few more have been added to the herd, the rhino's future looks bleak. I came to love their pacid ways and grave sense of dignity. It breaks my heart to think that future generations will not get to appreciate this magnificent beast unless stringent conservation measures are taken immediately...
.
.
For more A - Z posts, be sure to pop by Arlee Bird's site and see what others have done with the letter R...
.
http://www.tossingitout.blogspot.com/2011/01/very-special-and-exciting
Posted by Lynette Killam at 8:48 AM

The roller is a beautiful little bird - such wonderful colours.
It would be a shame to lose the rhinoceros - I hope it can be saved from extinction.

Oh, Lynette, it's so sad about the rhinoceros. I agree with Janice, I hope it can be saved. I've always dreamed of visiting the Masai Mara, but would hate to see it without rhinos.
My South African blogging friend Jo is now living in Kenya. I've seen her photos of the roller bird, and loved its amazing colours, but had no idea it was so fierce. How wonderful for such a pretty little thing. Too bad the rhino couldn't take lessons from it.
-- K

Omw, Lynette! My post on Skywatch tomorrow is the Lilac-breasted Roller! Your photos are amazing though. Have a wonderful weekend. (((Hugs))) Jo

Loved your take on the roller, but I am so concerned about the rhinoceros. Such a peaceful animal, not eating fellow animals, and all the waste of a beautiful species so someone can get an erection they imagine came from its horn. So sad that people cannot see beyond their own selfishness. Thanks for spotlighting this lovely beast! Found you at Poets United, and so glad I did. Amy Barlow Liberatore
A poem for you: http://sharplittlepencil.wordpress.com/2011/04/21/cobalt-blue-bottle-day-21-2/

Your tale of two distinctly different creatures is very interesting, Lynette. Both creatures ... grounded AND in the air are magnificent in their own ways. One would think the tiny featured bird would be less aggressive and the big beast less passive. I guess the smaller the wildlife the harder it must fight to survive. But I am concerned for the rhino. Thank goodness for the awareness an article such as yours brings to the public. I think any attention paid to mankind as a predator helps.

I just love the lilac breasted rollers, my photo's much further away of these ellusive wee guys.

Love the rhinos too

What a beautiful bird!! So full of vibrancy and color! And so sad about the rhinos :(

Oh what a beautifully colored little bird. Have never heard of them before. Just lovely.......the rhinos are great too and why do they remind me of myself???? Love the scenery in the background of their ample bodies. Africa, land of our dreams!

Such wonderful images, as always. Thank you for sharing.