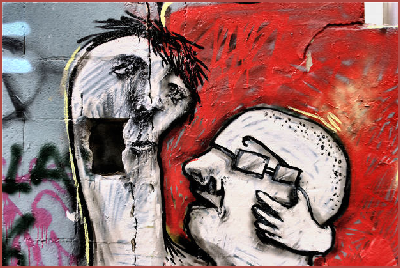 .
Wilson went nowhere without his spare head. He thought himself prepared for all scenarios, and it’s understood that any worthwhile endeavour requires the support of a back-up plan.
.
His second head was not quite as clever as his first, nor nearly as handsome…yet it could leap in and improvise when the first head was invaded with sensory overload and finally exploded. Second Head could supervise the clean-up, get First Head to the repair shop for a quick fix and do a reasonable job of being Wilson for a day or two, though it was admittedly a version of Wilson slightly befuddled and hampered by a disturbing lurch that he stumbled through.
.
No matter…in the busyness of his day, and the isolation of his cubicle, people paid little attention to either of Wilson’s heads and – sadly - never noticed the difference.
.
.
(This is a warped piece of silliness written in response to the photo prompt at Succintly Yours, yet as I came to the end, I realized I could empathize with Wilson’s sense of isolation, and could definitely use a spare for when my head seems ready to explode with craziness…:)
.
.
Grandma’s Goulash asks us to respond to a photo prompt in 140 syllables or 140 words. An additional challenge is to insert a chosen word into the piece, last week's word being ‘invade’, (yes, I'm a week behind!) Do stop by her link to read some interesting tales.
http://grandmas-goulash.info/category/succinctly-yours/

A clever interpretation of the prompt. Enjoyed that.

Using last week's image prompt isn't a problem! I like your take on the pic and I think if I wanted to, I could do a deeper analysis of it.

And thanks! LOL Though I was about to change my header for into something more colorful.

How sad that no one noticed! And he had such forethought, to carry the extra. LOL Some days I wish I had an extra head to rely on. :)

Well, you certainly are the imaginative one:) Sometimes I think I need two heads...but then I sometimes think I'd lose the one I have if I wasn't careful! Thanks for coming by to visit my blog:)

Hilarious, and as I read I thought you were being brilliantly clever, doing a take on yours and my current state of chronic befuddlement.........your second head must have been doing the writing, hee hee! This was a chuckle.

How sad to be un-noticed even when you have two heads, what's a poor Wilson to do!
Good one, I enjoyed it a lot, and thank you for your kind words, Lynette

Very good...you had me going there.

Wow that is a strange picture...your words match it well!

I really liked this! I was ready to laugh at this post but you took it a different way and I'm left scratching my head, deep in thought over the befuddled heads...no pun inteaded.

How did I miss this? What a clever response to the prompt. Well done:-)