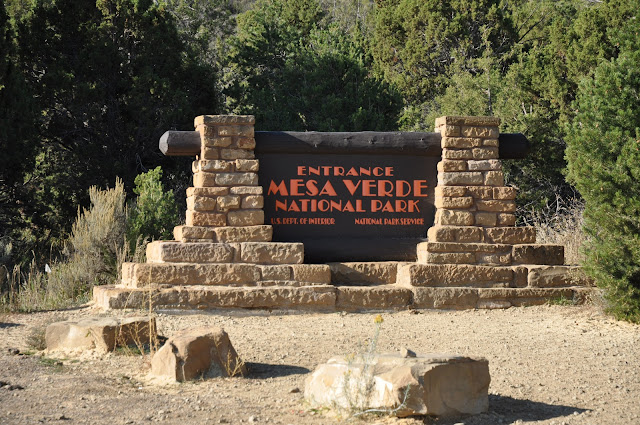 .
A U.S. National Park and Unesco World Heritage Site, Colorado's
Mesa Verde National Park was created at the turn of the twentieth century to safeguard the ancient cliff dwellings found in the park.
. 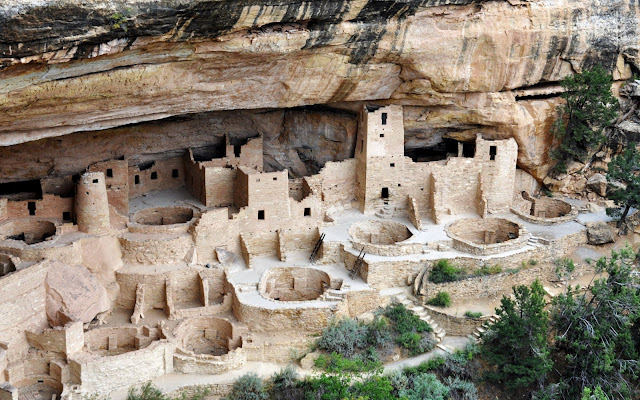 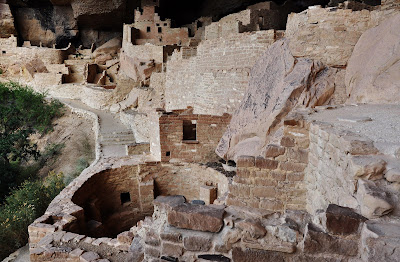 .
The ruined homes and villages are all that remain of a thriving community built late in the 12th century by the Anasazi, and inexplicably abandoned a relatively short time later. 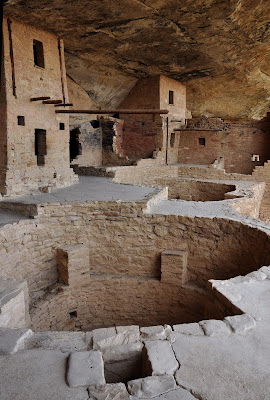 .
These Ancestral Pueblo people were subsistence farmers, growing corn crops on the mesa tops to fill their many storerooms and supplement the meat that hunting provided.
.
Anasazi women were famous for their intricate basket weaving, and Anasazi pottery is still highly prized. As no written record were left, these artifacts and ruins provide the only clues we have to the history of this civilization whose descendants still inhabit this part of the world.
.
Kivas at Balcony House 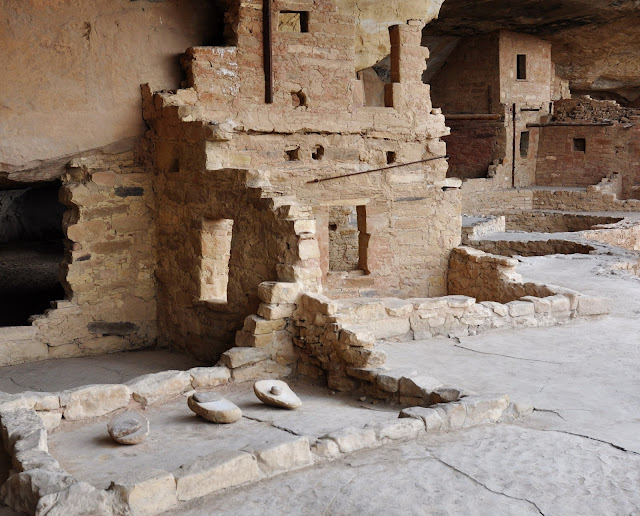 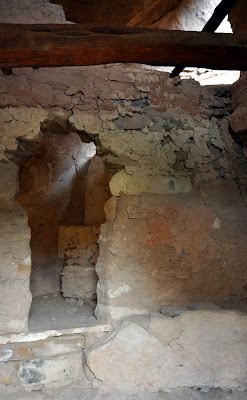 .
.
The largest of these dwelling,
Cliff Palace, became known in
1888, when two cowboys spotted
the ruins from the top of the
mesa, while searching
for stray cattle.
.
.
In these years before
archaeology took it's place in
the world of science, they
marshalled family and
friends,and began exploration
of the site, indiscriminately
knocking down walls and
roofs in search of the
countless artifacts which
they swiftly
removed and sold. 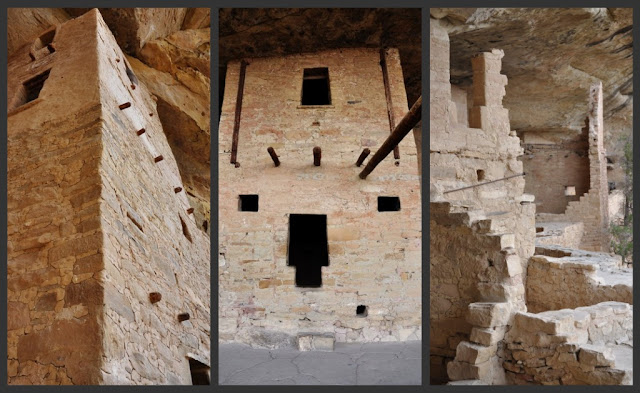 .
More vandalism followed as word of the discovery got out, and curio seekers flocked to plunder what they could. Floors were dug up, and kivas were destroyed. While camping on the site to facilitate the removal of souvenirs, looters used roof posts as firewood to such an extent that not a single roof remains intact. 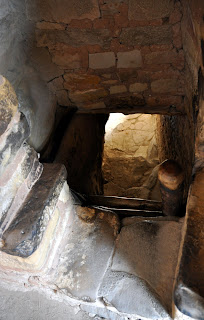 .
Add to this misuse the
considerable
erosion caused by weather
and time, and it is
apparent that the cliff
dwellings are visibly and
irreparably compromised.
. 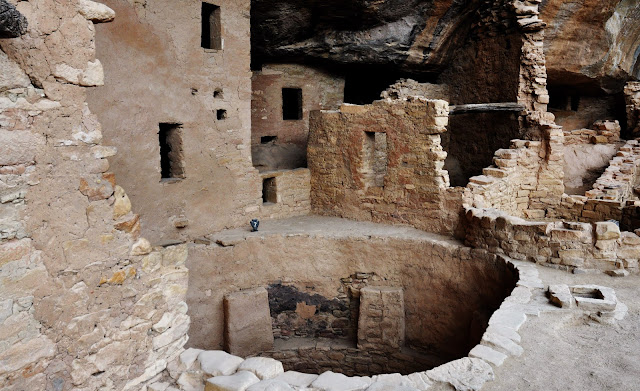 .
Mesa Verde occupies 52,000 acres of the Colorado Plateau. The climate is semi-arid, and the park has unfortunaelty experienced a number of wildfires in recent years. Juniper seedlings are returning, and oak trees have begun to resprout, but it will take decades for the forest to regenerate itself.
. 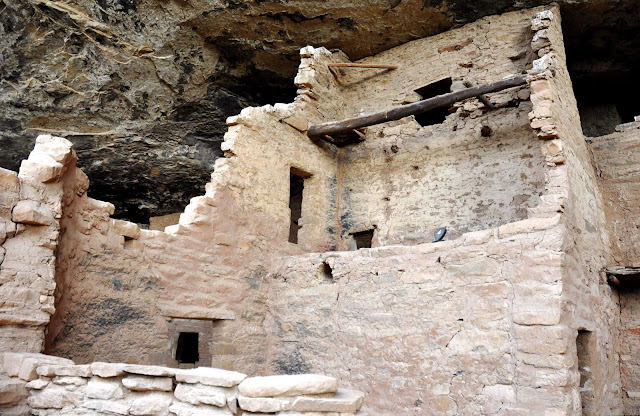 A recent post made clear my delight in the storm that thundered into the park on the day we visited.  If you missed them, check out the stormy skies that entranced me...
http://imaginationlane.blogspot.com/2011/05/mesa-verde-skies.html 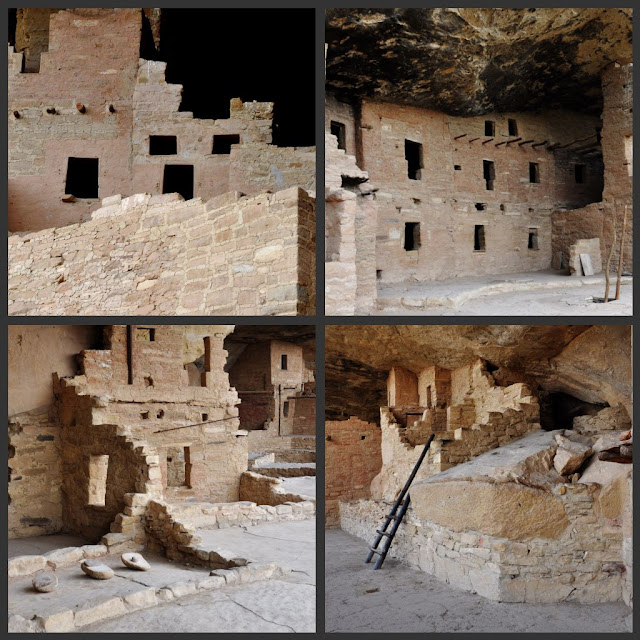 .
I'm linking these photos to Mary t's meme,'WindowViews and Doors Too'. To see more views from around the world, click on the link below...
.
http://windowviews2.blogspot.com/
.
I'm also linking to Lesley's 'Signs, Signs', always a fun meme to visit...
.
http://signs2.blogspot.com/
Posted by Lynette Killam at 10:18 PM

Great shots and very interesting post! I had never heard about the Anasazi!
Thanks for sharing;o)

These awesome crumbled structures remind me a little of the inner bowl of the Colosseum in Rome … although not geared towards violence. What a mystery … if only we had a time machine to see it bustling with inhabitants when it was new and at its best.

What a fascinating place it is!

The cowboys who plundered this wonderful place were just doing what came naturally...treasure hunting. They knew nothing of preserving history, and cared less. That was the frontier mentality. "Gold" in them thar hills, in whatever form it came, was their "right" as conquering settlers.
Burning the roof beams...heartbreaking. However, modern scientists are able to glean a great deal of knowledge from what remains, and the indigenous peoples of the area can learn much about their ancestors.
Beautiful photos, my friend, as always!
— K

What fabulous buildings, and such an interesting history. Such a shame that it was discovered before we all realised the value of preserving history!

Do you know that every time I see an interesting or run down sign, I think of your blog posts? Well it's true! Great shots as always ~

And thanks so much for participating in this week's Limerick-Off!

OH! I LOVED visiting that park many years ago. Thanks for the great memories. :)

fascinating! i enjoyed your photos and writing.

OMG - super shots! I have to go back and study them again.

Your photos are beautiful - and haunting as Debra writes. I had heard of this park but nothing of the history (until now!).

Oh I have always wanted to see these ruins. And now I have! Fabulous photos. How sad that so much of this was destroyed. Thankfully this remains, to give us a glimpse into this long-ago life.

Fascinating history, thanks for sharing the story. Thankfully, what's left has been preserved.

That is a place I would love to visit. Great shots!

What a shame about the looters and vandals who stole from and burned rafters of these incredible ancient structures. It reminds me of what looters did to the ancient Egyptian pyramids.

Fantastic photos, as always, Lynette. You and your husband go to some interesting places!

What a great place. Wouldn't it be fascinating to see the people who lived here!

The ruins are so interesting. It's too bad they were plundered and misused.