Although I haven't been blogging lately, a friend of mine has recently returned from  South Africa, and her photos served to remind me how much of my heart I left on that continent. I thought I might do a series of posts to highlight the wonderful lodges we stayed at in the course of our safari...

My husband and took a photo safari through Kenya and Tanzania eight years ago.This trip remains one of the true highlights of my life. I felt immediately at home with the golden savannahs that stretched on forever, and the hot sun that loosens tight muscles and seems, indeed, to slow down time itself. 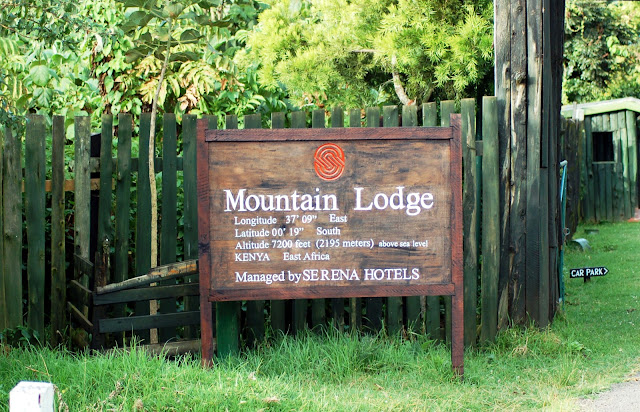 Our first stop after leaving Nairobi was the Mountain Lodge. Mount Kenya is in the highlands of Kenya, so shrouded in mist that when we were there, I was only able to capture a shadowy shot of the mountain itself. 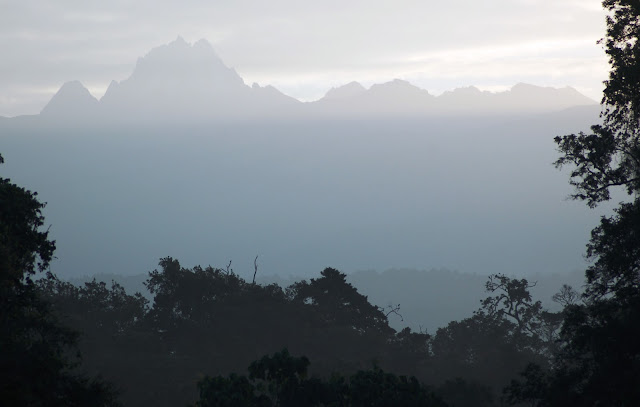 It is simply a magical place. The
lodge is wrapped around a waterhole that abounds with animals day and night. 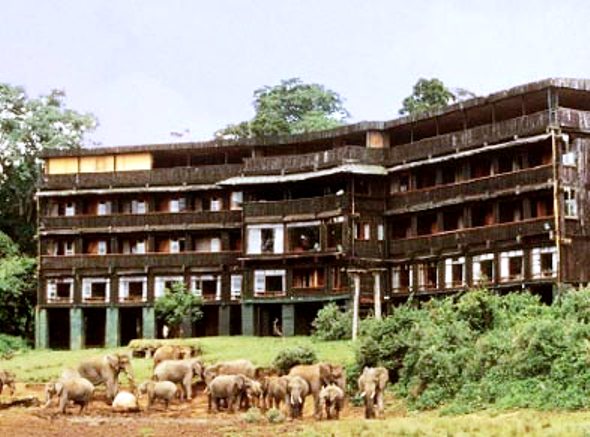 (Google photo: We weren't allowed out there!)

Arriving just before dark, we found hot water bottles
nestling in the cold beds to bid us welcome. 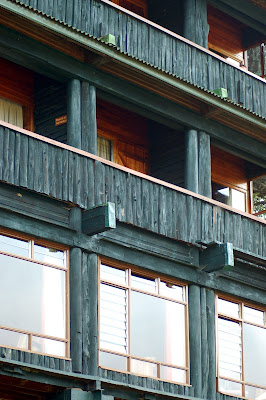 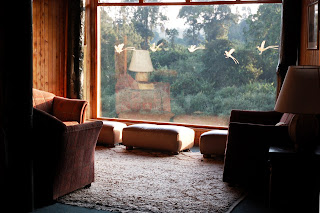 Sleep was the last thing we were thinking about. Each room has its own private balcony with a view of the waterhole and its visitors. Sitting there watching Elephants and Cape Buffalo wander in to drink, the rest of the world ceased to exist for me. 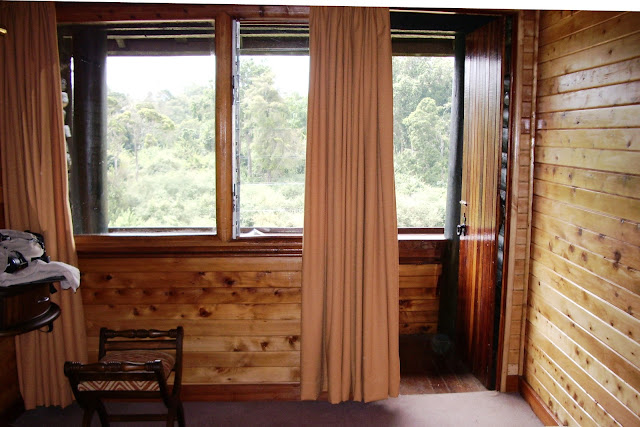 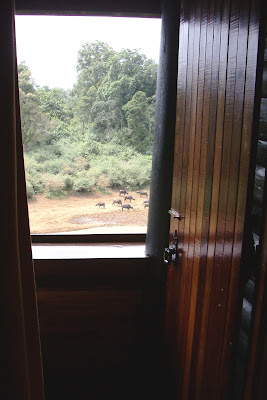 With the shuffling of hooves and splashing water the only sounds to be heard, we could sit quietly and watch the animals go about their evening as if we were not there. It was a privilege to do so.

Management informed us they
could awaken us in the night if the more elusive animals showed up. As soon as the pre-dawn knock sounded on our door, I rushed out to our balcony and watched a leopard lap warily at the waterhole.

I did not take a picture for fear of disturbing him in any way. It was one of the two very brief times we were to see a leopard on our safari.

I may have no shots to show for it but my mind can instantly conjure up the long, tense lines of this striking predator who soon fled that open space for the safety and visibility afforded by the tall trees. 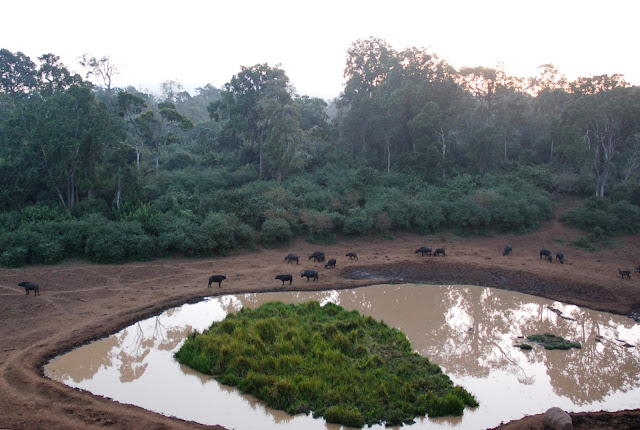 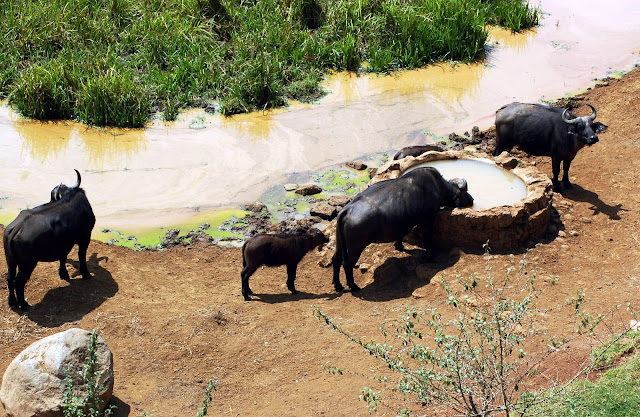 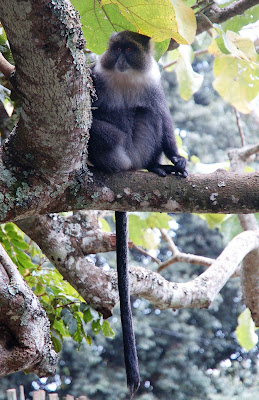 Monkeys are prevalent in Africa. Although undeniably cute, they are considered pests, and tourists are directed to discourage them. 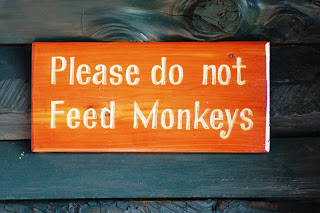 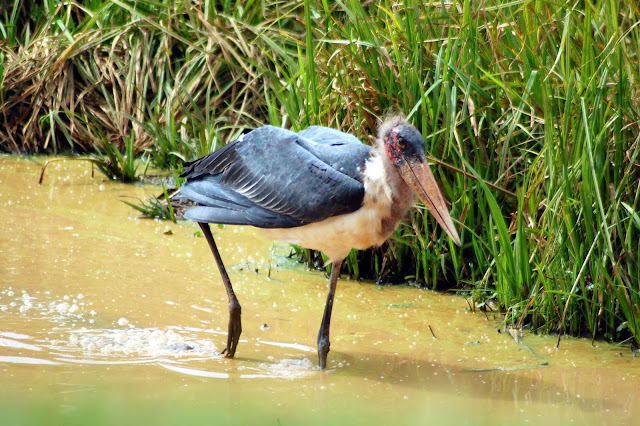 As well as viewing the animals from above, the lodge features an underground tunnel leading to a viewing room with tiny barred windows at ground level. It is wonderful to see the wildlife close up, though a somewhat dubious pleasure in the case of the very homely Marabou Stork! 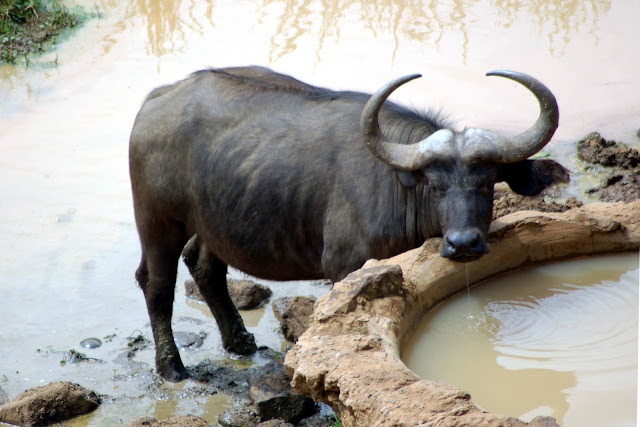 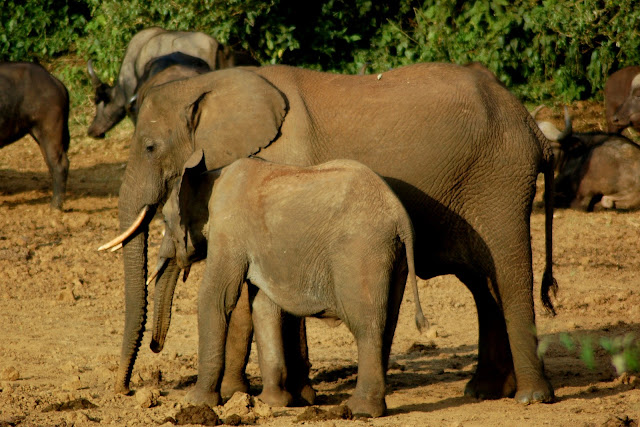 The next day we were led on a walk through the forest, escorted by armed guards,one in front, one in the rear - rifles slung over their shoulders and fingers at the ready.

We grew accustomed to their presence in East Africa.The guards protect tourists from possible animal attacks, but are also vital in the control of poachers whose ruthless greed is reducing the herds of African wildlife to alarming low numbers. 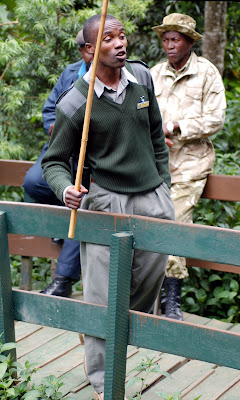 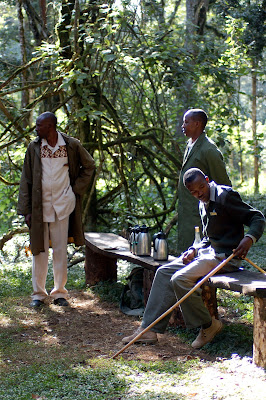 On this hot sunny day, we were also advised to cover up well, with trousers tucked into boots. The wisdom of that became clear when mosquitoes  swarmed around us and ants flooded over our feet in great numbers. Although tiny, these siafu have huge pincers that can inflict great pain upon reaching bare skin. 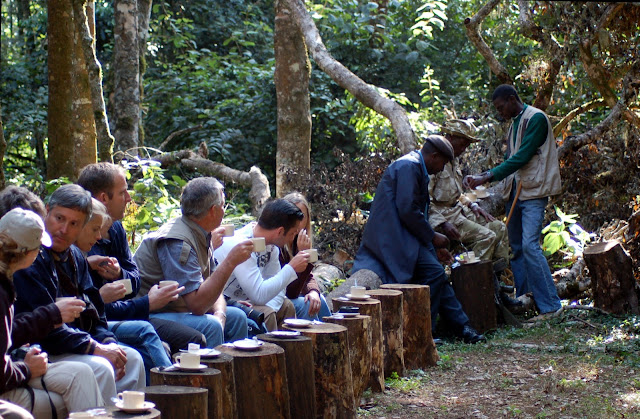 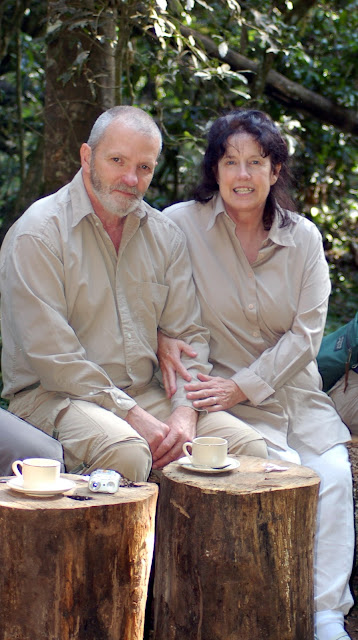 After walking for
a while, we came
to a clearing, and
were delighted
to see that tea
had been set
out for us.

Sipping Earl Grey
from a china cup and
nibbling thin biscuits
in the heart of an
African forest is
only one of the
many lovely
memories I took
home with me.


I strongly suspect no other afternoon tea I partake of will quite compare with this one...

Next time, I'll take you to Kenya's Samburu Game Reserve.
Posted by Lynette Killam at 6:52 PM

Oh Africa! Tea set out on logs in the forest with the wonderful Kenyan guides answering questions about wildlife. You are so blessed to have seen a leopard, Lynette. And I am so thrilled to see you back on blogger. Look forward to seeing more of your travels across one of God's most beautiful African countries. Jo, Tanzania

It's so nice to see that you are blogging again. Beautiful pictures.

Well, you know my heart was right there with you as I gobbled every morsel of this post. Imagine sitting watching elephants below - and then a leopard! WOW! So nice to see you posting, kiddo. We miss you!

p.s. The tea in china cups reminds me of the scene in Out of Africa, where they had not only china, but a gramophone. The height of romance. Sigh. I think we both need to re-visit that movie soon!!!

It is always nice to see you return to the blogging scene, Lynette. How thrilling and unforgettable, indeed, to see wildlife in its natural setting instead of the zoo. I fear for those elephants, though, as their vulnerability and possible extinction is still in the news. It is unfathomable how anyone can harm such creatures in the face of their numbers dwindling.