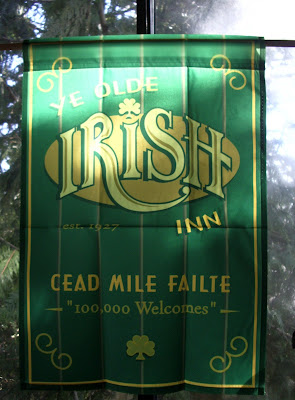 Since my children were small, I've made a great fuss over St. Patrick's Day. It was not something we did growing up in Ireland, but as a treat to amuse my wee ones years ago, I began to colour their milk and potatoes green for this special day.
.


The notion exploded, and really...how was I to know they would never get over it? Now a table of full-grown adults, and whomever else we can con into it graciously invite, gather at table each year to partake of green wine and a motley assortment of viridian-tinged victuals. 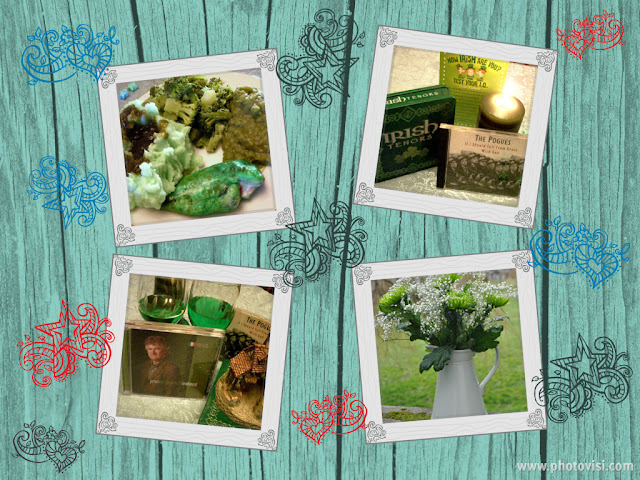 It is great sport to check out the reactions. We've had guests who were quite unable to eat at the sight of dark, mushy peas crowding up against lividly-tinted spuds...and skinless chicken that glows fluorescent green on the outside and is fish-belly white when cut seems to repel everyone. 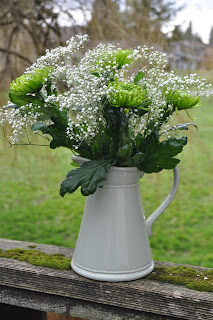 .
.
It must be said, however,
that others have fit
right in, stuffing
food into their mouths
in the knowledge that
it all tastes just
the same
anyway.
.
These people we embrace
into the family! 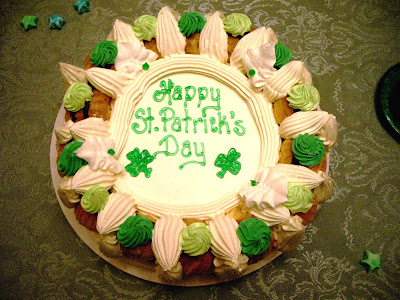 .
.
This year, scheduling conflicts force us to postpone celebrations
until next week...cancelling was not an option, apparently!
.
.
I leave you
with a few photos of previous dinners, and a collage of my girl
Meeghan in her
St. Paddy's Day pullover.

.
But should you hear the raucous sound of the Pogues somewhere in tomorrow's celebrations, you'll know I'm having a grand oul' time singing along with them!
. 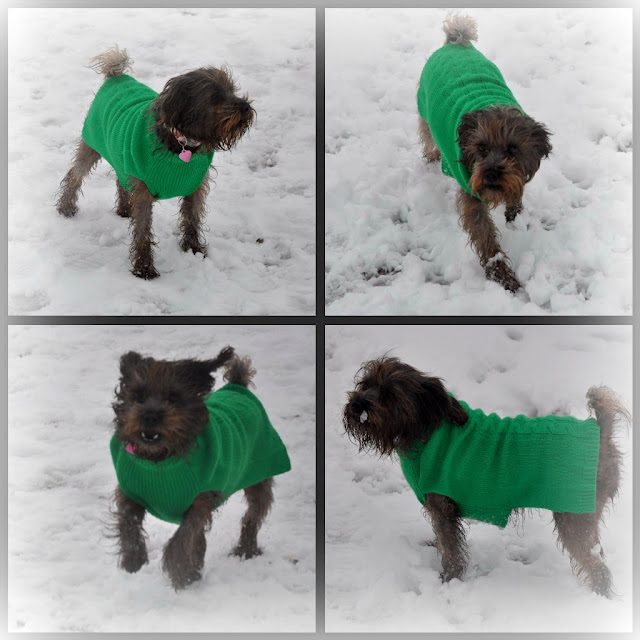 Have yourself a wonderful day!
Posted by Lynette Killam at 12:49 PM

I love St. Patrick's day celebrations. Making a roast and Champ potatoes. Season roast with a dash of Guinness. Wish we had celebrated when my children were small. Now everyone is scattered.

Did you make the cake in the photo? If so, would you share recipe and decorations.

I love the sound of your St. Patrick's Day dinner, especially the Champ! Will definitely remember the Guinness next time I do a roast, too.

I did not do the baking here...it is a St. Honore cake we get at a local Italian bakery and have them decorate for different occasions. They are yummy, so light and creamy, and there are lots of recipes online. Enjoy!

Thank you for taking time to respond to my question about the cake. You rock.

Well, isn't Meeghan stylin' in her green St. Paddy's Day pullover! She is a cutie. It's so funny to me that you have a green meal every St. Pat's Day, as the family I lived with in Ireland thought Americans/Canadians were quite odd to make green food for the day. But I understand your honoring the country of your childhood that way. In the past, I'd make green chocolate chip cookies for my family for March 17th, and I'd even send them to my sons away at college. Now I celebrate the day with corned beef, which I know isn't really a traditional Irish meal, but rather a meal of the Irish immigrants to the new world.

Ah, this answers my question: yes, you ARE turning everything green for St Pat's.......CBC Radio today was touting stout and described one called milk stout that apparently is delicious. I have never been a beer fan, have never tried stout. But I may just attempt one of those milk ones, to see if it holds up to the hype:)Meghan is adorable as ever in her green clothes.

Love that cake and doggy sweater!

I like the looks of the cozy winter green Meeghan is wearing in the photos. Green happens to be one of my favorite colors and I like seeing it on just about everything, including the icing and leaves. I’m not so sure about the spuds, though, as I might confuse them with brussel sprouts. :))

Well now I can't imagine why green chicken was off-putting ;o) Anywho, there's serious business over here before the drinking gets under way, final weekend of the 6 nations and Ireland are playing England at Twickers...

Happy St Patrick's Day to you and yours....I loved reading your celebratory ways of the day :)
Meeghan lots great!!

Thank you for your recent visit to my Blog. Much appreciated :)
I was in California on holiday,until earlier this week. My husband was attending a Conference in San Francisco. We had a few days of holiday afterwards with my son as well.
I love that Pacific area so much.

St Patrick's Day thoughts, although my thoughts are less enthusiastic, than when I was a child. The news of The Holyland area of Belfast being trashed by students, again, leaves me feeling glad to be away from it all.
http://www.bbc.co.uk/news/uk-northern-ireland-17406406

I used to live there when first married. It is a shame to see it all now.

Aside from that, we must catch up with an email sometime soon!!
Best Regards,
Eileen :)

You certainly get into the spirit. :) Fun post.
Madeleine Begun Kane